Here you can see some of the easy to see signs of oil heat. Beware that the absence of these signs does not mean there is no buried tank. Only a tank search can tell for sure if a house has or doesn’t have an underground storage tank. Even a house with a letter of decommissioning can have an non-decommissioned buried tank still there.


It is recommended to schedule an oil tank search when located in a neighborhood that existed prior to the 1980s. Our Homebuyer’s Ultimate Inspection Package offers a tank sweep, radon test, and sewer scope at the same time.
If any of these common oil tank signs are present it’s a clear indication that oil heat was used at some point.

For homes built before 1985 (or who have neighbors built before 1985) an Oil Tank Scan is highly recommended if one has not been done. When as underground tank fails a new tank could be added. This is common because it was easier than changing to a new furnace type. Keeping a tank in the ground is easier than bringing the tractor, so it is very common to find tanks in homes that had oil-to-gas conversion. Take a look at the photos below, while doing so please click on them for more information. These are the most common oil tank signs:

The supply lines (click the photos for more information) 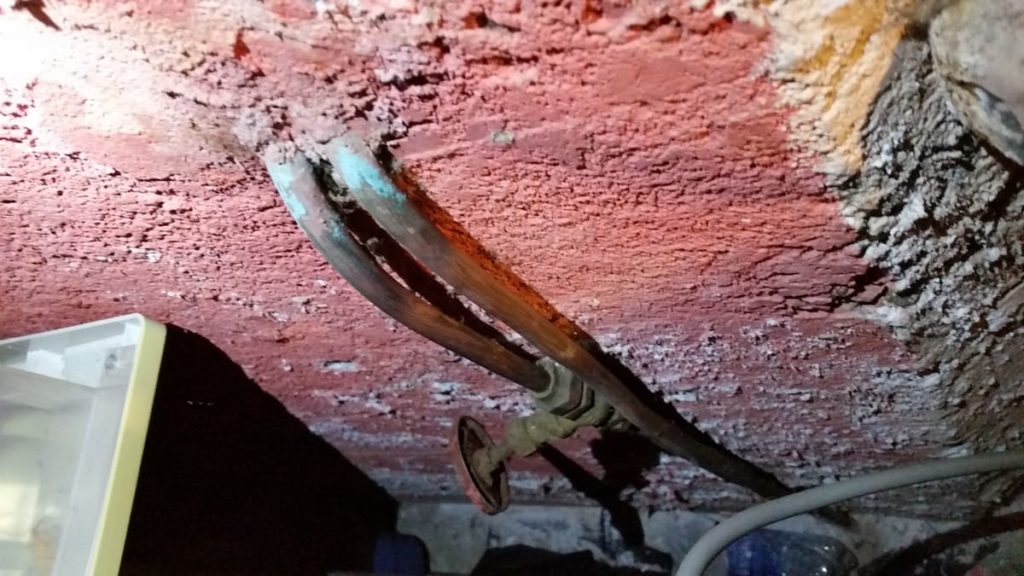 Which homes have oil tanks?

The installation of Washington and Oregon oil tanks in new homes occurred primarily between 1930 and 1970. But any house built before 1980 could have had an oil tank in use at one point. Houses which had oil heat added after construction have more visible signs. Homes constructed with oil heat have fewer signs and indications.

What signs you ask? A common oil tank sign is the basement trench. A patch in the foundation floor about 4″ wide that commonly heads from the furnace are to a wall. Fully finished basements will reduce or remove all easy to find signs of heating oil inside the home.

Homes built after 1970 can still have oil tanks though, especially if the area the house was in a rural area when built. By about 1975 new construction with oil tanks was tapering off. Replacement tanks still went into the ground until the 1990’s.

Not every ‘decommission’ was done correctly. People forget things and some companies that went out of business lied to people.

Any lot could have had a tank previously

Oil tanks could have existed in farm houses and barns or other rural structures. Many places that were outside the city a decade ago and are now within a city limit and surrounded by homes. As they say, ‘Any lot could have had a tank on it previously.’

A highly professional Oil Tank Search can be yours for only $100. We recommend getting a tank search if: